18 things to do in Sydney

First things first. If you are visiting Sydney and want to tick off the main items off your Sydney bucket list, then Circular Quay is where you wanna be. This is where you can see the Harbour Bridge, Opera House, a harbour, get a gelato and just walk about. 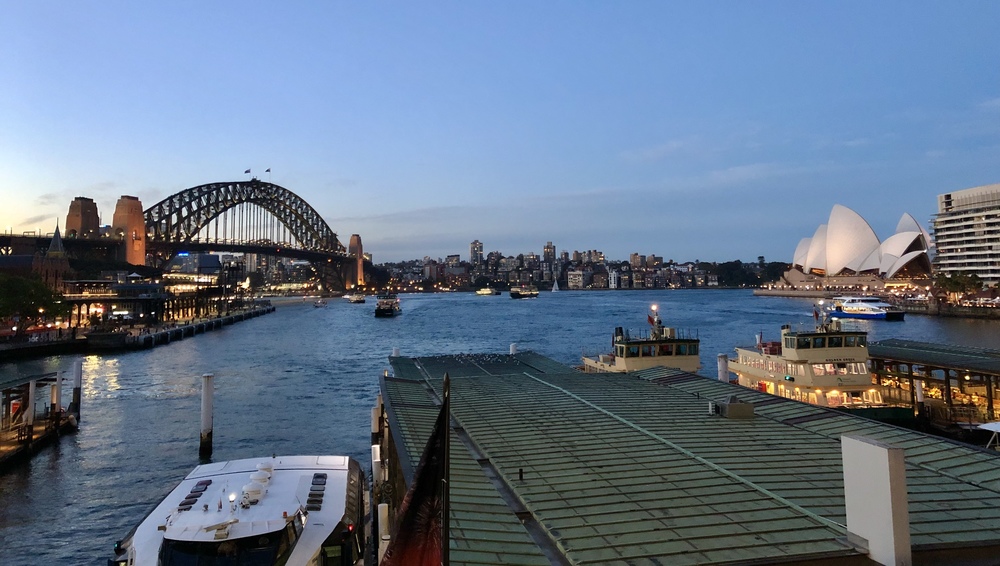 The Harbour bridge is obviously one of icons of Sydney and Australia itself. From Circular Quay, you can see a close up view of the bridge. 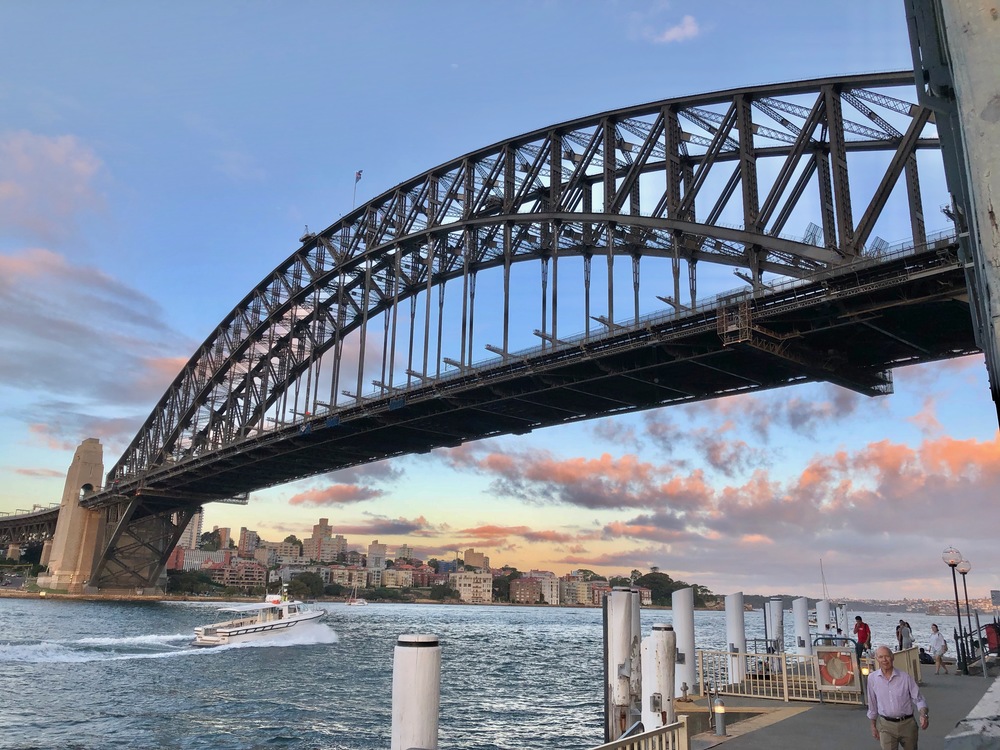 Tip 2: Climb to the top of the harbour bridge. This one's for the adrenaline junkies.

Tip 3: The Harbour Bridge has a rail track between the stations of Wynyard and Milsons Point, which connects the city to a neighbouring suburb North Sydney. So if walking across isn't your thing, take the train across and appreciate the magnificent views of the harbour!

From the Circular Quay, the Harbour bridge is just a 5 min walk. You can walk up the steps, enjoy a meal with it as the view, watch a theatre inside, or just simply take photos. 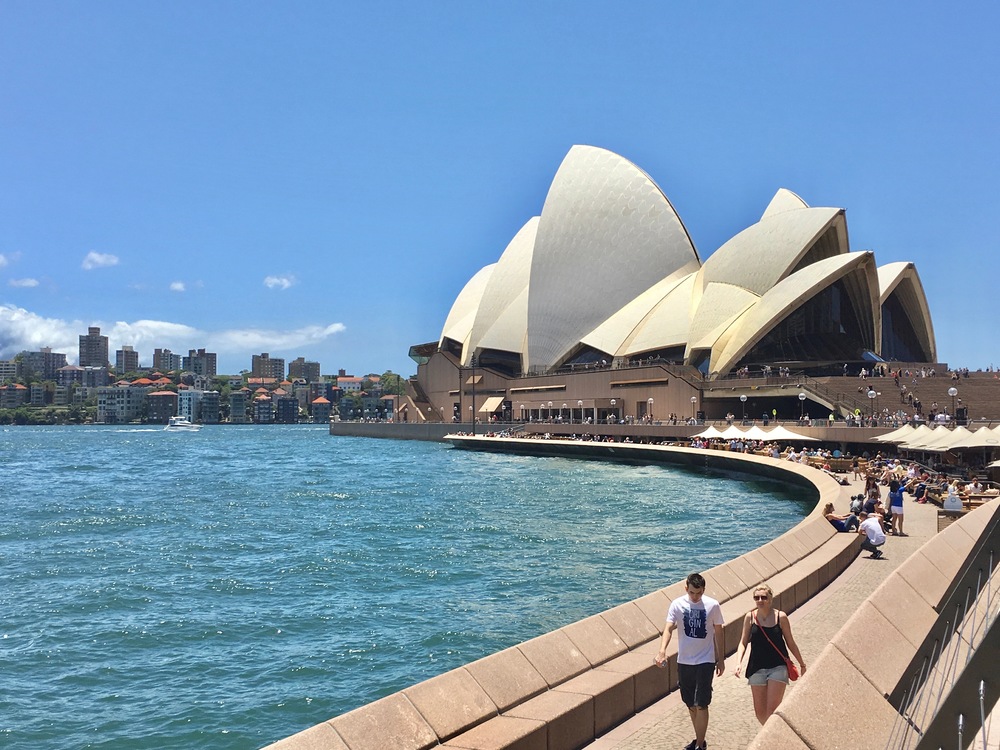 While you are near Circular Quay, it's best to also visit a closeby community, which is "The Rocks". Surrounded by beautiful cafes and restaurants, it's also famous for local shops. While the shops with permanent stalls are open everyday of the week, there's also the more temporary ones that open only on Fridays, Saturdays and Sundays. These ones particularly sell local goods and hand-made crafts you might want to check this out. From leather bags, clothes, hats and scarves to locally made facial products, pearls, house decor, and everything else in between. They also have food trucks so you'll be fine if you do get hungry whilst doing your shopping. While it is known to be the centre of Business and Finance, Martin Place is also a pedestrian mall surrounded by several heritage buildings and statues and memorials of the 1927 World War. It is pretty much the "civic heart" of the CBD, which features a water fountain, entertainment area, pedestrian seating and has a railway access to the Martin Place station. 6. Say hello to the Sydney Tower

The Sydney tower, which is next to Martin Place and pretty much the malls in the city, is Sydney's tallest tower. It also currently holds 2nd place in terms of the tallest observation deck in the Southern Hemisphere. It sits above the Westfield mall and if you're up for a 360 rotating restaurant with a view, this is where you want to book a romantic dinner for. For about $80/head, you can take advantage of the sumptuous buffet about a thousand feet above the ground and enjoy watching the sunset over a glass of wine or two. 7. Shop at the Queen Victoria Building

Definitely for shoppers out there, big brands such as Coach, MJ Bale, Furla and the like are here in this heritage-listed building, constructed between 1893 and 1898. If you are not into shopping, this building is still worth exploring from the outside and within and be in awe of the architecture and interior involved. Another harbour you need to visit in Sydney is the Darling Harbour which is home to a lot of nice restaurants, bars, shops and magnificent views across the harbour. This is walking distance from the Sydney tower if you are coming from there. Make sure to also visit the Darling Harbour at night! You can always just walk about, have a nice dinner, go to a bar, or even watch the fireworks at 8:30pm on Saturdays. I'm sure you know what Chinatown is all about but Sydney's one was established in 1920, which as you'd expect would be full of Chinese restaurants so I'm keeping this one short! :) 10. Take a stroll at the Hyde Park

Another must do if you're in the city is to visit Australia's oldest parkland, built from 1810 to 1927, known as the "Hyde Park".

Sitting on the eastern fringe of city, the park is a rectangular shaped greenery and it's a beautiful walk along well-kept gardens, surrounded by approximately 6000 trees. Think Central Park of Manhattan (okay, maybe not as grand but it's definitely an amazing spot to just chill and appreciate nature in the midst of the city) Tip 1: Have you seen a Wallaby yet? Visit the Hyde Park and you'll have a 90% chance of seeing one. They usually sit in between branches and spotting one is for the sharp eyes. Tip 2: If you are into visiting gothic churches, next to it is the St. Mary's Catholic church which you wouldn't miss if you are visiting the Hyde park. 11. Relax at the Bondi Beach

Sydney is known for its beaches. One of the popular ones is Bondi. And if you're not an ocean person, right next to it is the famous Iceberg pool. 12. Do the Bondi to Coogee walk

This one's not for everyone as the walk is 7 kms! However, you don't have to finish the entire trail as well. We have got to say the views are magnificent and you at least should try at least the first 30 mins walk as you will be met with sceneries that are breathtaking.

This is generally a 2 hour walk but for first-timers, the walk will certainly be longer than usual as the views will certainly get you to stop and appreciate them. Another beach to visit that's only a ferry ride away from Circular Quay or Darling Harbour is the Manly Beach. 14. Eat @ the Grounds of Alexandria

People usually come to the Grounds of Alexandria for unique ambience and vibe along with the specialty food and coffee in it. The area used to be a pie factory that is now surrounded with gardens and beautiful flowers against brick walls. Certainly a great place to catch up with friends!

“The Gap” of Watsons Bay, Australia is one of Sydney’s best ocean cliff lookouts and faces the Tasman Sea. Views are just magnificent. 16. Check out the Taronga Zoo

The Taronga Zoo is just a ferry-ride away from the Sydney CBD is a perfect Sunday morning time with the family. If you are visiting, we fully recommend visiting on a week day where there's less people. 17. Go for a historical walk in the Cockatoo Island

Prior to the arrival of Europeans in Australia, the Cockatoo Island was used by the Aboriginal people / indigenous people of Australia. However, since 1839, the island was chosen to be a penal establishment, serving as convict prison. Prisoners were being transferred to the Cockatoo island and were employed to construct their barracks and rock-cut silos. The place is now a World Heritage Site, proclaimed by UNESCO. People visit the site to see a bit of history and try to imagine the conditions the convicts lived under on the island.

18. Check out the Luna Park

The Luna park is 1 of only 2 amusement parks in the world that is protected by government legislation. It's basically a heritage-listed amusement park, which was constructed in 1935. The park has closed and reopened several times due to several incidents in the past, including the 1979 incident "Ghost Train Fire", which completely destroys a ride called "Ghost Train" killing six children and an adult. It's been closed and reopened several times after the incident to ensure safety and repairs are attended to.